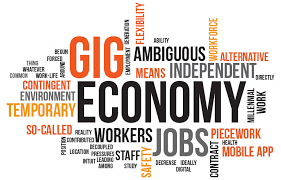 In a gig economy, temporary, flexible jobs are commonplace and companies tend toward hiring independent contractors and freelancers instead of full time employees. A gig economy undermines the traditional economy of full time workers who rarely change positions and instead focus on a lifetime career.

Broader understanding of gig economy also includes companies like Uber, Lyft and Airbnb. Uber and Lyft have empowered everyday drivers to become paid chauffeurs. Airbnb made homeowners hoteliers. Flexible, on demand and temporary arrangements helps both the service providers and the clients.

But a more common understanding of the gig economy refers to the services provided by companies such as Upwork (formerly oDesk), Guru, and Freelancer. These are online environments that bring the project owners or clients together with developers, service providers and freelance workers. They provide clients with an opportunity to post their projects, and the contractors to contact the clients and bid on their projects.

This type of work has been growing, and many people and many companies use them now.

There has also been a lot of internet chatter about this type of economy replacing the traditional one. But many experts also point to the fact that most of us still work at traditional companies and make money in traditional ways. Even though the gig economy may be growing, it won’t replace the traditional economy anytime soon.

Some even called the gig economy a hype, which will slowly disappear.

Our view is that the gig economy is here to stay, but it won’t be a quick transition. And it may never replace the traditional economy completely. But it will become one of the standard ways many people perform business.

The reason is that, once something becomes possible due to new technological advancements (in this case the internet, and mobile access to internet), and it provides benefits (flebility for workers, and lower cost for clients and companies), it will usually become permanent, and find its place in the future economy.

But people usually expect too much from new developments, and expect the results too quickly. This is similar to the dot com bubble of late 1990s and early 2000s. Many early internet companies had very high valuations, and everyone thought the whole economy was quickly moving to the internet, but most of those businesses failed. And many investors lost a lot of money.

What people failed to realize is this type of change takes time, and people, companies and the economy in general will not change very quickly.

But in just about two decades, we are now seeing that a lot of brick and mortar retailers are closing shops due to growing online retail businesses, such as companies like Amazon. And almost all businesses now have online sales on their own websites, or through Amazon.

So, the change is happening, but slowly.

Same thing is true for the gig economy, since it also progresses slowly, and comes with its own challenges and problems.

« How to design a clock divide-by-3 circuit with 50% duty cycle?