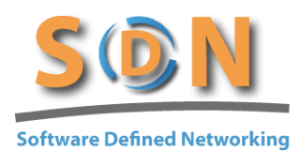 By decoupling the control plane and the data plane in the complex networking equipment, SDN (Software Defined Networking) makes it possible to simplify the design and development of computer networking hardware. It moves the complex control plane decisions to a remote server, and leaves only the physical layer and a limited layer 2 functionality in the networking hardware itself. It embodies all the recent trends in the computer industry such as the open source software development and cloud computing. Moving the control plane to a remote server is similar to the idea behind cloud computing, and the OpenFlow and OpenStack software that are widely used in the SDN networking equipment are open source software, which means anyone can use them to develop their own flavor of a network switch.

With SDN, this can become the reality for the network switching hardware as well. This will shake the status quo in the telecommunication networking industry, and disturb the tight grip of a handful of network equipment manufacturers. They will start losing their profit margins first, and then their market share.

They are combating with this trend by seemingly embracing this transition, and incorporating it into their own platforms. They provide the separation of control and data planes, and reconfigurability of switching setup in response to changes in the network. But they support all this on their existing platforms, or with some upgrades to the existing platforms. This defies the purpose, since SDN allows reduced complexity and reduced cost, while simplifying the reconfigurability of the network in response to dynamically changing conditions. While the SDN type support in existing platforms can provide the reconfigurability, the only way it will provide the cost savings is if the manufacturer gives up some of its profit on the hardware that it normally sells for a higher price. And even then, it cannot really provide the reduced complexity in the networking hardware, since it still uses the same hardware.

And if they build new, cheaper hardware, and join the crowd, then they abandon their established business model and high profit margin they enjoyed all this time.

There are of course some hurdles in the SDN approach currently, since it still cannot always perform as good, or as fast, or as reliable as the existing solutions. But I believe it is just a matter of time until these difficulties are overcome, and SDN becomes a completely viable approach and a better replacement for the existing networking hardware and software.

SDN represents a paradigm shift in networking in my opinion. And it is the future. It will disturb the existing business of some of the established companies, and then make way to newer companies.